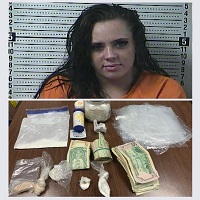 One person on drug charges Tuesday in Danville.

Boyle County Sheriff’s Deputies, along with Danville Police, responded to the parking lot of Walmart in reference to suspicious activity. The caller gave the registration plate to Danville 911 which came back stolen out of Lexington.

Deputies located a suspicious female, identified as Molly Pierce, of Nicholasville next to the Murphy’s Gas Station. Investigation revealed Ms. Pierce had an active warrant for her arrest. Found in her back pack/purse was 11.8 ounces of methamphetamine, 20 grams of heroin, 29 grams of cocaine, 6 suboxone pills, and $927 in cash.

Ms. Pierce was also in possession of the keys belonging to the stolen vehicle. Surveillance cameras show her parking and getting out of the stolen car. A stolen handgun was also found in the vehicle.