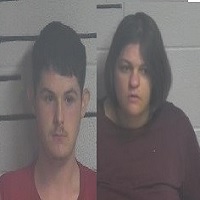 On Tuesday afternoon, Adair County 911 received a call from a residence in the 5000 block of E. KY80. The caller reported someone shooting at his house and then broke into his camper.

Adiar County Sheriffs Deputies found a man and woman were still inside the camper, but the two refused commands to come out.

Additional units from the Columbia Police and KSP arrived on the scene. Sheriff Brockman and CPD Officer Jimmy Luttrell made entry into the camper and located the pair hiding in the bedroom.
The couple were taken into custody without further incident.

Both were lodged in the Adair County Jail.

The investigation is ongoing by Sheriff Josh Brockman.