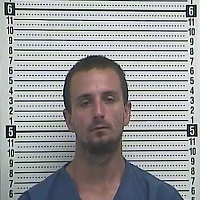 A report of two people sleeping in a car on private property leads to drug & weapon charges.

Casey County Sheriff Chad Weddle responded to the call Wednesday morning around 8:30, 6.5 miles North of Liberty on KY49. The caller stated the vehicle was behind a trailer, belonging to Rita Wethington. Roy Wooley and his wife Taylor were inside the vehicle with possible drugs inside.

Sheriff Weddle responded, along with Wooley's probation officer, Tyler Harrold & located the two, asleep in the front seat. After waking them up, they noticed a holstered pistol in the passenger side door panel as Taylor was exiting the vehicle.

The .25 caliber pistol was loaded, with one in the chamber.

Wooley granted consent to search the vehicle, which turned up a leather pouch, containing a meth pipe, 2 straws, & digital scales, all with residue, along with a piece of paper with brown suspected methamphetamine.

Wooley stated all the items, including the gun, were his. And that he had used meth earlier that morning.

Roy H. Wooley III, of Liberty, was charged with Possession of Methamphetamine-1st Degree/2nd Offense, Drug Paraphernalia, & Possession of a Handgun by Convicted Felon.

He was lodged in the Casey County Jail.